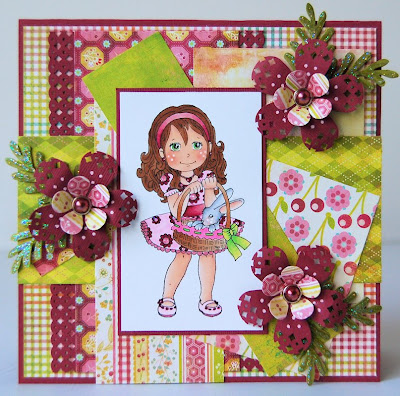 Today i made this card using a stamp from Inky Impressions. This one is called Angelica and she just got her new bunny, Ginger. She is so excited to show all of her friends how cute she is! I used design paper from Basic Grey called Lemonade and i used a variaty of punches. The flowers are from EK success Retro flowers large and medium. I also used a borderpunch from EK Success called Parisian. The leaves are a punch from The Punch Bunch called Fern. Brads are from Papermania. Colouring has been done with my Copic Sketch markers. Thanks for stopping by and for the commens you leave for me to read.